Chandigarh: Police have arrested two people for drug possession. Atul Syal, aka Sunny (31), a resident of Dera Bassi, and Gaurav, a resident of Sector 21, were arrested from Sector 18 while in a car. Police said 15 grams of heroin and 28 banned injections were recovered from them. The police have registered a case under the NDPS Act at the Police Station Sector 19. TNS

Chandigarh: Two motorcycle suspects allegedly snatched a cell phone in Sector 37. Complainant Shaurya Dutt alleged the miscreants snatched his iPhone near the government school. A case has been registered. TNS

lalru: The police arrested two youths and seized 2.6 kg of opium from them. The suspects have been identified as residents of Bareilly, Aaf, 23, and Ram Lakhan, 22. They have been booked under the NDPS Act at Lalru Police Station. On Wednesday, Sadar Kharar police arrested three people near a private school and recovered 2.6kg of opium from them. A case was registered at Sadar Kharar Police Station. TNS 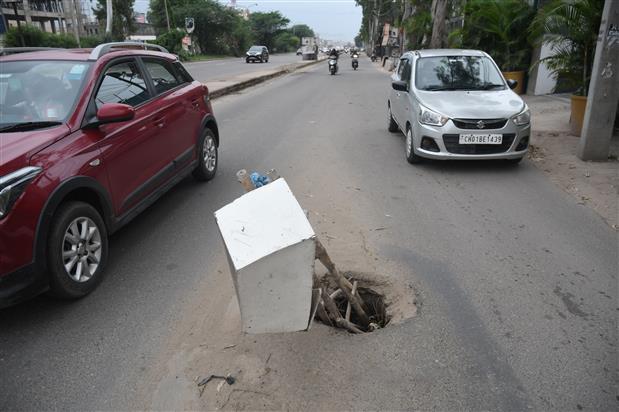 Zirakpur: An open manhole poses a threat to motorists in a lane near the underpass in Zirakpur on Friday. An improvised arrangement has been made to warn commuters and prevent unpleasant incidents on the route. STAND PHOTO: RAVI KUMAR

Chandigarh: The Chandigarh Lawn Tennis Association will host the CLTA-AITA Championship Series (CS-7) boys and girls U-14 and U-18 tennis tournament from August 1-5. The qualifiers for this event will be played at the CLTA tennis stadium in Sector 10 on July 30 and 31. As many as 75 players have signed up for the qualifying events. Players from Chandigarh, Punjab, Haryana, Uttarakhand, UP, Manipur, Gujarat, Maharashtra, Telangana, Rajasthan, Delhi, Tamil Nadu, West Bengal, J&K and Karnataka will participate in the tournament.