After three years of waiting, the IS Bindra PCA stadium got the roar of the spectators back, as well as the controversies.

When India faced Australia tonight in the first of the three-match T20 series, fans claimed police officers helped their loved ones crash and fill the stands. Many fans, despite having tickets, kept waiting outside the stadium and were even lathicharged when they demanded entry into the stadium. Even after half the game was over, fans lined up outside the venue.

“The police claim that the stands are full and that they have closed the entrance gates. How can the stands fill up when half of us with tickets are still outside,” said Gaurav, a young fan.

Before people entered the stadium, people faced parking problems and ‘rude’ officers at the entrance gates. Some fans were lathicharged by police personnel.

“Deployed officers didn’t help, they were rather rude. At one of the entry points (gate 3/4), agents helped some fans to gatecrash easily. Those who objected were confronted with batons,” said one fan.

“The authorities should deal with such situations. Crowded places are delicate to handle,” says Sahil.

Anjali, who had a confrontation with a Punjab police officer, said: “Police officers have to be good with people. We paid for our tickets and deserve some respect. They treated us like we got in for free.”

Outside the stadium’s main entrance, drivers of many government vehicles were seen arguing with police officers over parking.

Although the Indian skipper lost the toss, fans were delighted after the hosts were called up to bat first. The Indian side didn’t let them down, posting 208 runs in 20 overs. The moment of the match came when former captain Virat Kohli came in at number 3. However, there was a deafening silence in the stadium as the former skipper left by scoring twice.

“I came specifically to see Kohli. He is my real hero. He played very quietly, but unfortunately soon went back to the pavilion,” said Amrinder, a young fan.

“It’s good to see T20 cricket making a comeback here. It was a joy to watch both India and Australia play in a packed stadium,” said Ankit, another spectator.

Some fans were allowed to sit in the media room. A similar incident was reported at this site during the 2011 World Cup semi-finals in India and Pakistan and the BCCI took strict note. 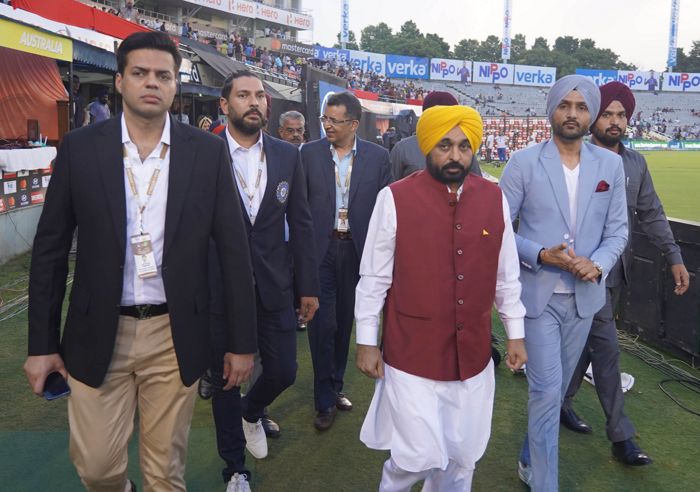 Many people of different disabilities reached the venue to see their favorite players in action. A special stand was set up for them. “It’s really great to have a special place to enjoy the cricket match. It would have been easier if the police had allowed us to park our vehicles at the gate,” Pooran said.