After receiving a lukewarm response to his long lease, the Chandigarh Housing Board (CHB) has decided to further reduce the minimum price of commercial units by 15%.

In order to attract buyers, the Board of Directors of the CHB recently decided to lower the minimum price of nearly 100 unsold commercial units built on the land allocated to the board on long lease.

Yashpal Garg, Chief Executive Officer, CHB, said 98 commercial units would be offered for e-auction after lowering the minimum prices by 15% compared to the previous e-auctions and that it would likely get a better response in the new e-auction. -auction. – tender process.

Also homes up for grabs

On the rationale for the leasehold sale, Garg said, “As the land on which these were built was allotted on a leasehold basis, we cannot sell these on freehold unless authorized by the Chandigarh administration.”

At the same time, 23 homes on private land that have remained unsold in previous e-auctions will also be auctioned again. 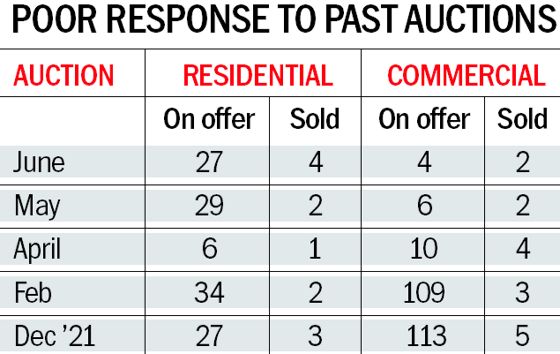 Of these, the reservation prices of 17 properties in the Indira colony will also be cut by 15 percent, Garg said.

Also in September last year, the CHB had lowered the reserve price of commercial leasehold premises by 20% and residential properties by 10%. The CHB had reduced the minimum price of corner shops with verandas on two sides by nearly 50% due to a change in the calculation method. The CHB has time and again received a poor response to its homes and commercial properties put up for auction.

An official said the CHB could sell 170 units and generate Rs 115.46 crore from April 2021 to February 2022. During the auction of 27 December, the CHB sold only five of the 113 business premises on a long lease basis. Likewise, only three of the 27 homes were sold on a long lease.

“The main reason for getting a poor response to auctions has been high aggregate prices that set the minimum reserve price of each unit,” said Kamaljit Singh Panchhi, president of Property Federation Chandigarh. Adjacent parts of the city in Mohali and Panchkula districts were considered a better option due to the overall progress in addition to the much low collector rate, he added.