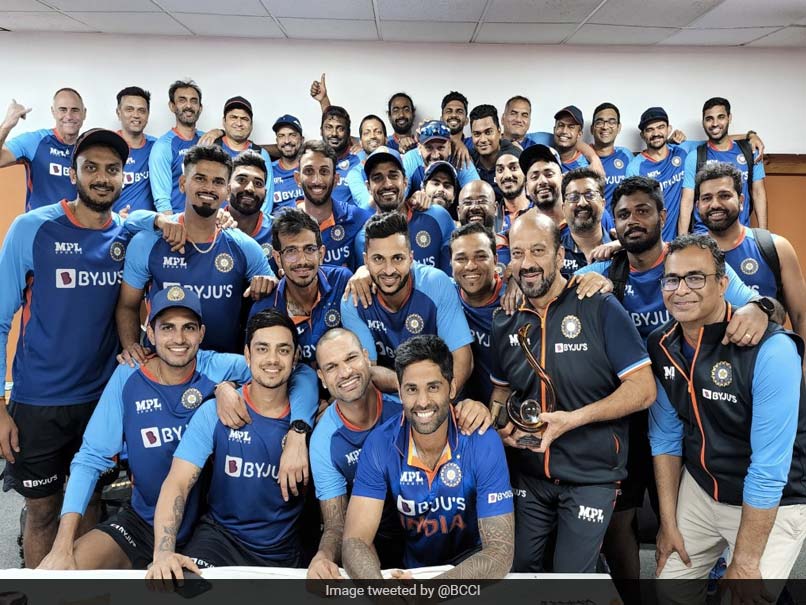 The Indian cricket team after the WI series victory.© BCCI

India coach Rahul Dravid praised the “professionalism” of his young outfit, who have shown some “big signs” to move forward as he beat the West Indies 3-0 in their own backyard in the just-concluded ODI series. Shikhar Dhawan on Wednesday became the first-ever captain of an Indian team to clear the West Indies on their home ground after the visitors defeated the home team by 119 runs in the third and final ODI here. “We came here with a very young team. A lot of the guys who played the England series didn’t play here and the way you reacted, the way you played in three games and the level of professionalism you showed. Dravid said in his locker room speech after the last ODI.

“A few tight games and to get on the good side of those high pressure races, some great performances under pressure was a really great sign for a very young team.” Dravid also praised Dhawan for his proficient leadership.

Of the #TeamIndia Dressing room!

Here is a dressing room POV – By @28anand

PS Beware of the end – expect something fun when Shikhar D is around pic.twitter.com/x2j2Qm4XxZ

“Very well done by Shikhar. I think he led very well. Well done to all of you, great achievement.” Dhawan said this young Indian team has the potential to achieve many more successes in the future.

“As a team we would like to thank the support staff and all the team members who helped us. We really appreciate your support. And well done guys, both batting and bowling unit.

“You have done an amazing job. You are young and have a vision to become much more than you are now. You have already started taking those steps and you will come a long way,” said Dhawan.

The skipper ended his speech with a triumphant cry: “Who are we? Champions.” The action now shifts to the five-game T20 series against the West Indies starting Friday in Tarouba.