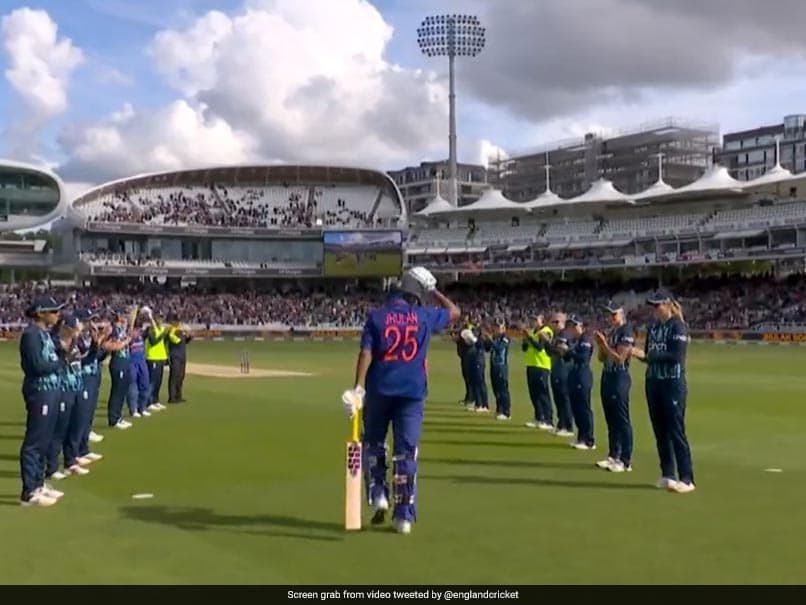 Legendary Indian pacesetter Jhulan Goswami received a huge round of applause as she went to international cricket for the last time at Lord’s on Saturday. Veteran Seamer had already announced that India’s third ODI vs England in London would be her farewell match. Not only the audience at the iconic venue, but also the English players gave her a grand reception as they lined up to give her a guard of honour. Indian all-rounder Deepti Sharma, who was in the fold when Goswami came to bat, also joined the England players by giving her a guard of honour.

Goswami also acknowledged the audience and the players before taking her fold.

For more than 20 years, Jhulan Goswami has walked in, hit a stretch and charted a path.

She has thrown nearly 10,000 balls in ODI cricket, and she may have inspired just as many young girls to try cricket.

Goswami’s stay at the fold could not last long, as she was thrown by English pacesetter Freya Kemp for a golden duck.

Meanwhile, England bundled India for 169 runs, despite Smriti Mandhana and Deepti Sharma’s fifties. Smriti scored 50 runs, while Deepti did not stop at 68.

For England, Kate Cross returned figures of 4 for 26, while Freya Kemp and Sophie Ecclestone claimed two wickets each.

The match in Lord’s, London gives the Harmanpreet Kaur-led squad a golden opportunity to complete a string of victories over England and bid a memorable farewell to Goswami, who has long been the spearhead of India’s bowling.