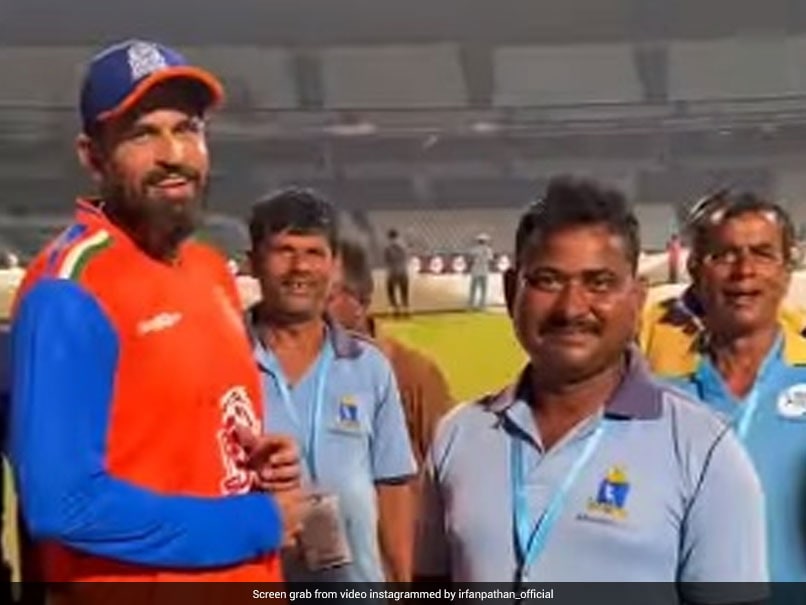 Yusuf Pathan met with the ground staff of the Eden Gardens after his Team India Maharajas charity match against World Giants ahead of the Legends League Cricket Season 2 on Friday. His brother Irfan Pathan shared the adorable video on social media, saying: “There is still so much cricket in your lala @yusuf_pathan top batting again.” Yusuf notably played a pivotal role in Friday night’s match with his unbeaten 50-run knock coming from 35 balls and helped India Legends book a six-wicket victory at the Eden Gardens.

After the match, both Yusuf and Irfan acknowledged the commitment of the ground crew and the duo also shared some moments of laughter with them.

India Legends chased a goal of 171 runs in the game, losing to Virender Sehwag, Parthiv Patel and Mohammad Kaif, thus being reduced to 50 for 3 in 6.5 overs. This is when Yusuf Pathan entered the crease and bagged 103 runs for the fourth wicket with Tanmay Srivastava to nearly seal the game for India Legends.

Srivastava fell to 54 from 39 balls, but Yusuf made sure to stay there until the end to take his side home. He later tied a 22-run unbeaten score with brother Irfan to help India through.

Previously, Pankaj Singh returned 5 for 26 in his four overs to stop World Giants at 170 for 8, despite Kevin O’Brien’s 52 from 31 balls.

The Legends League Cricket Season 2 kicks off on Saturday with a game between India Capitals and Guarat Giants at Eden Gardens.

Speaking of Yusuf Pathan, the player retired from all forms of cricket last year. He played 57 ODIs and scored 810 runs with the help of two hundred and three fifty. His strike rate in the format was 113.60. Meanwhile, he was also part of 22 T20Is, scoring 236 runs with a strike rate of 146.58.