The new order, which leaves just six minutes for vehicles to pick up or drop off passengers at the gate of Chandigarh railway station, has drawn sharp criticism from the public, with commuters calling it “unrealistic and impractical”.

Tricity residents say the new system is highly impractical, especially given the crowds of people and vehicles seen in the zone. 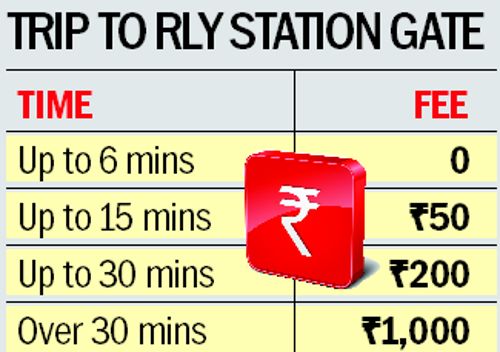 Under the new system, commercial and non-commercial vehicles coming to the gate of the railway station will be exempt from paying the parking fee for only the first six minutes while they will be charged Rs 50 to 15 minutes, Rs 200 for up to 30 minutes and Rs 1,000 for more than 30 minutes.

In a letter to Ashwini Vaishnaw, Minister of Railways, Shashishankar Tiwari, a former member of the Zonal Advisory Committee for Railway Users and Chairman of the Purvanchal Vikas Mahasangh Tricity, has claimed that local railway authorities along with the Ambala Divisional Railway Manager provide commuters in the name of the parking lot and that the practice must stop immediately.

If the matter is not resolved by authorities at the earliest, a public interest lawsuit will be filed in the Punjab and Haryana High Court, the letter said. They are further planning a protest in the public interest if the system is not rolled back.

“It’s nearly impossible to pick up or drop off passengers with luggage in six minutes,” he says, adding that if a person is late due to congestion, who is responsible for the high cost.

With the new order, taxi drivers will be reluctant to drop off passengers at the gate and instead ask them to get off outside the train station, causing even more inconvenience to the public.

Furthermore, a resident complained to the Prime Minister alleging that the parking contractor had been charged Rs 1,000 for 60 minutes even though the train arrived 45 minutes late.

The public must park vehicles in designated parking areas where Rs 20 will be charged for three hours. They can then pick up passengers when they reach the gate, he adds.